Just as despair began to set in following the initial foray into the market for a low-power, mini-ITX replacement board for my rapidly aging VIA EPIA-PD, a glimmer of hope appeared on the horizon.

The internet rumour-mill began to whisper of a something altogether new. Intel’s first completely new processor design for generations, codenamed Silverthorne, was soon to hit the market. Designed from the ground up for low power consumption it promised to be a viable alternative to the VIA cores. As hard facts began to appear, Intel’s branding changed to Atom – if it lived up to the pre-release hype it would be impressive indeed.

Waiting anxiously for confirmed details of products that were proving little more than vapourware, news began to filter through of delays in Atom’s accompanying chipset. It seemed my quest for a mini-ITX motherboard with an Intel Processor/Chipset combination would be delayed once again.

Imagine my surprise to be greeted a few days later with a number of articles describing exactly what I was looking for. The board in question was a new addition to the Intel Essentials range, the D945GCLF. The technically astute amongst you will have already realised how the Atom processor arrived without its chipset – Intel modified their existing 945GC chipset to work with the new processor. Although details were (and still are) noticeably absent from the Intel website, a number of retailers began to flesh out the board details, amongst the first were TranquilPC and CarTFT. 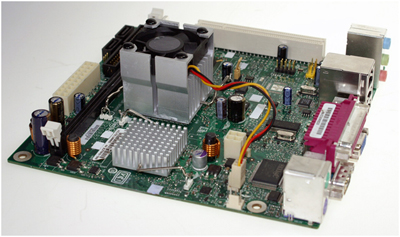 The board promised much:

Grav was with by Trilby Media.